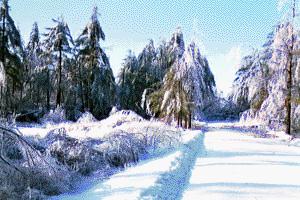 The forecast is for 6 to 12 inches of snow today and tomorrow. I need to get back to my place to get the rest of the firewood off the road before they plow. Hope the road was cleared wider by the town crew by now otherwise they will not be able to fit a plow in the cleared path .. because we cleared only wide enough for a car.

The road at my place was cleared .. so both ends of the road are now open. I moved all the rest of the firewood I cut off the road .... and the snow started falling harder. Had about 6 inches of snow on the road when we left there with another load of dry firewood ... and headed back to Potsdam. Snowed heavy on the way back ... the plows were out. Most of the troops and power line trucks had left Potsdam and were working farther out. Grocery store was busy and was open till 6pm instead of 5pm.

There are 60,000 people up here who are without power. The main towns are starting to come on line, but the people outside of town will take much longer. The are still estimating in the range of 2 to 4 weeks to get everyone back on line. People will need to get generators to run their oil furnaces or some other source of heat to deal with that long of a wait.

The schools have the problem of what to do with the people still needing shelter.... when they open school again next week. The state needs to come up with a policy that doesn't punish schools who are serving as shelters by requiring them to complete the same number of days other schools need to complete a year. If all schools are required to make up all the days then many school districts will not want to be shelters next time. ..... Many small towns have no other building in the town that is large enough to serve as a shelter.

It's been amasing how well people have worked together and helped each other out during this crisis. One guy offer to drain the pipes in the house of a friend of his who ran a bank if he would go to the bank and get enough money so the grocery store would open. Many people were on a rotation with one generator being moved from house to house in town to give a few hours of running their oil heat on the generator until the house got hot then the generator moved on to the next house. It rotated all day and night in a neighborhood so more people could have heat. One place in Vermont offered generators at cost if you could get there.

Very few problems here .. no rise in prices, few theft problems, because everyone knows each other. In Canada in some of the cities the prices of everything went way up and the troops had to be given arrest powers.

I think a lot of people here came to a new realization of the importance of their neighbors... and having good neighbors meant they not only survived the Ice Storm of 1998 but had a pretty good time doing it.

[Things We Learned In The Ice Storm (Humor)] [Return to Menu]
[Return to Local InterNet Sites List for St. Lawrence Co. and NNY]

-- Things We Learned In The Ice Storm -- 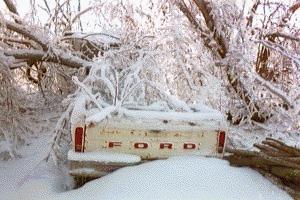