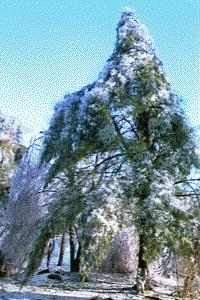 Last night the rain stopped at about 11pm.... this was very important because if it didn't stop soon the forest would have been almost a complete loss. as it is now the loss was substantial but not complete. it was cold last night with a little wind so branches and trees fell through the night but at a slower rate..... radio reports from Canada said the ice continued through the night there. must be a real disaster there.... the temperature rose during the day today but only just barely rose above freezing by late afternoon. then it started raining fairly heavy... it seems to be just melting some of the ice as it falls but it could go either way ... from the satellite maps (on my dc tv) it looks like we were just on the edge of the rain last night and today. cold air is moving in low (close to the ground) from canada (arctic air mass). and the warm air (from the gulf of mexico) is over riding the cold air and raining down into it. What we need is a short time of warm air (and rain if it isn't freezing) to take some of the ice off the trees, because they are all still carrying the full weight of the ice, and then we need the cold air to move in and push out the rain. they were forecasting the cold would move in tonight 7pm and the rain would stop... but the latest forecast is for more freezing rain for tonight. so far it is raining but not yet freezing .... there is now thunder and lighting and in the tangle of trees it looks like a scene from nuclear winter!!!! hope this patch of rain (thunder storm) moves through and the rain holds off here like it did last night or we are in trouble. in any event the change over should be sometime tonight .... to cold. the local radio stations are still off the air!!!! so much for the emergency broadcasting system ...... we are getting our best source of info from the dc tv on the weather forecast from watertown... all the latest satellite maps, and st. lawrence county conditions.


this morning all the emergency agencies and police met to develop a plan. the governor declared a state of emergency for all the counties up here. Niagara Mohawk said at this meeting things are much worse then they thought and they now think it could take up to 2 weeks before power is restored to all the area. It will be a real problem for the people with oil heat. .... no heat for up to 2 weeks means a real need for shelters. some shelters have no heat and are being heated by body heat (like cows heat up a barn) to fairly good temperatures. the real danger is the cold arctic air will move in next .... could even get to real cold temperature that would mean everyone without heat would have to move to shelters or risk hyperthermia. what a problem.... canada is even worse... last night they estimated 2 or 3 million people without power up there.

We are doing really great here. since the loss of forest has slowed down, it is not as stressful. we have everything we need..... heat, food, water, dc electricity, radio, computer, tv. no phone line ....is still out. today we spent the time before the rains started cutting the trees and tops in the road (about every 15' a branch, top or tree). It will take days to cut a path to the main road. two of us are cutting from here to our neighbors along the road and we'll join up cutting with him to cut the rest of the way to the main road. about a mile. ...estimate it will take 2 or 3 more days of cutting to get through. if things don't get worse. we each cut whatever trees we want that are on the road and throw it on opposite sides of the roads along our land to pick up for firewood later. so we are getting paid for our work in fire wood. we are leaving the branches on the road as we cut because if we meet the road crew (or the national guard if they are called out) coming up the other way we can get help with the branches ... they may be able to spare some workers to throw the brush off the road... what will be in short supply is workers who can use a chain saw. ... it needs some skill to cut trees under tension as they bend over the road and tangled together. so I'm just doing my normal work of cutting fire wood and leaving the branches for last. When it snows I'll use my snow mobile and sled to pick up the wood (all cut to an easy to handle length).. so this may work out pretty good. we hope to connect to our neighbors section of the road tomorrow and he may have a front end loader working by then to help with the branches and brush. we are better off here than anybody we have heard of.... we think we have enough gas to cut our way out ... we can siphon the car gas tanks if we need more. we plan on sending some one up the road the other direction to tell the people up there we are planning to cut our way out through our neighbors end of the road. so they can cut towards us and when we connect we can all work to cut the rest of the way out to the main road together. I actually don't care about getting to town but we have friends in town that may have no heat. so some people may need to come out here if heat is off for a week or more. In canada they are asking people with wood heat to take neighbors in who are without heat every one on this road has wood heat.

Feel much better since the loss of trees slowed down. ... it was really scary .... it could have just continued until no trees were standing.... what a disaster. so far it is not that bad here but places in Canada may be to that point now. our best source of news (tv --- via dc battery) is not available to most people who do not have electricity. so the loss of all local radio stations is a real problem. especially the emergency broadcast system. We get a few canadian stations for weather updates but they are even worse off than us.
In the last report I called this the ice storm of the century... the canadian weather service called it the worse storm of any kind in over a century .. in this area. they have real problems up there to get all those millions of people to shelters.
so, as the rain slows down some, I'll sign off till later. Need to get some more firewood inside for the night. Take care,