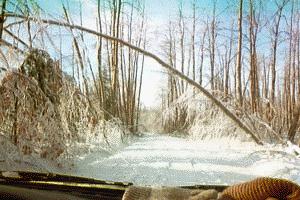 I got up at first light to move my piles of hardwood for firewood that I stacked on the road into 2 big piles and marked them so when the town crew comes through they will not push them off the road or cover them with brush. So at mid morning, 2 of my neighbors and I got in their car and started out for town.

We made it to the corner of our road and the electric wires were a little to high above the road to feel ok about driving over. so we searched around for a good size poplar log and threw it over the wires to bring them closer to the ground. We heard a front end loader and ask him to see if he could get the wires lower. He pushed the pole around and pushed down on our log. the wires were touching the ground and it looked good enough to pass. We talked to him and he gave us the latest on roads that were still blocked, downed transformers, etc. We left him, cautiously crossed the wire and headed on. 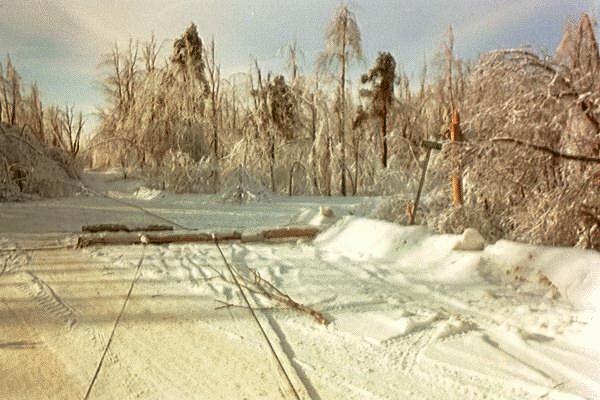 The road was pretty good only a few more downed wires (they were already marked with yellow tape) In Colton, the gas pumps were off but the store was open. I called on the phone to tell the outside world we were ok. Called friends in Potsdam and their neighbors answered the phone. I found they were ok but needed more firewood. Their phone was outside in a shed across the street from their house because the lines were down and their neighbor reconnected a phone to the lines and the phone connected was the one I called. It took about 5 minutes for my friends to get to the phone. So they had an outside phone that they shared, but no power. 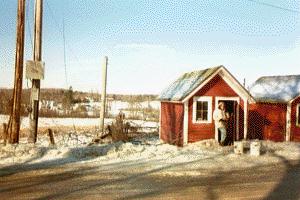 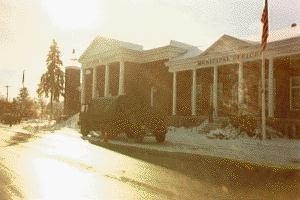 As we drove into downtown Potsdam, the traffic lights were out, but there were very few cars and they were taking turns. Those new army jeeps, humvees were there. The jeeps are very wide (wide enough for 4 people?) and very low. there was a generator in front of the town offices. Maxey Hall (college gym) at the college was the shelter for the area. I filled up a 5 gallon can of gas at Sugar Creek they had power for the pumps. It was very busy but only short lines. 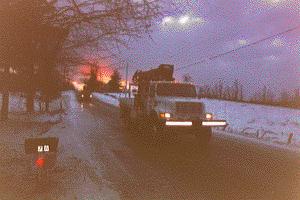 Met up with my friends dropped off someone who was going to volunteer at the shelter and then and we went out to their place to see how things were going and get ready to go back to my place to get them more wood before the dusk curfew. They had some wood that the neighbors had given them. but needed more hardwood for the night as temperatures were predicted to go around Zero f. They were almost out of candles so every thing had to be done before dark. The main shortage was light at night. They were doing pretty good with all the neighbors helping each other. The neighbors had an oil furnace in the house that was off (no power). But they had a wood stove in a work shed and they were in the shed keeping warm. Another up the road had 20 people in his house keeping them warm (wood heat) because many people had oil furnaces and no heat. He loaned his generator to my friends neighbors (they had lots of kids) and they could periodically turn on the generator to run the oil furnace, heat the house then turn the generator off (to conserve gas) until it got too cold again. (another army helicopter flying over as I write this). so everyone was helping each other out things were pretty good.

We headed back to my place in the woods to get a load of hardwood and be back before the curfew (we heard curfew violation was a $500 fine). We took pictures of the partially cleared road on the way back. We loaded up on wood and I brought all the things I thought we would need for my 12 volt system. We got back before dark. I took the 12 volt battery out of the car and set up a command center on their kitchen table. We had a fluorescent light (= 60 watts) that pretty well lighted up the kitchen. their radio batteries were almost dead, so wired the radio up to my dc converter that converts 12v to 9v for the radio. I had the 12v dc tv, so we could see the satellite weather maps on the weather forecast. We had to plan everything around the weather. I also brought my computer (notebook) and we had everything we needed running off the car battery under the kitchen table. I figured I could charge the battery by putting it back in the car and riding back to my place tomorrow for more wood as we had just enough hardwood for the rest of the day and night. Exhausted we ate a good supper. Their gas stove was working so they could cook. We were doing pretty well. Others were not a fortunate, facing zero temps with no heat. radio was asking all who had no heat to get to a shelter if they could travel.